The aluminum shortage that began amidst the 2020 pandemic continues to plague the US now, and for the forseeable future. Aluminum productionand demand was shifted with the beginning of the pandemic and country wide lockdowns. While the average consumer previously purchased beverages in restaurants and breweries, they were now seeking out solely canned drinks to keep at home. This sudden growth of can demand was something aluminum producers were not prepared for. This led to shortages and overbuying.

In addition to the pandemic, magnesium restrictions is another contributor to the present aluminum shortage. Most of magnesium is sourced from China, though China’s smelting limits and efforts to decrease emissions restricts the amount they can export. Seeking out alternate magnesium suppliers is often too expensive to consider.

Unfortunately, although aluminum is often preferred due to its light weight, it requires a high amount of electricity to produce. Fourteen megawatt hours are necessary to produce one ton of aluminum ingot, which is enough to power a home for an entire year. For reference, the US alone manufactures five million tons a year.

As far as the aluminum shortage ending, experts are hesitant with predictions. However, most agree the earliest expected end would be sometime in 2023. As the nation moves back towards normalcy, aluminum purchasing could subside and have uncertain impacts on the supply chain. In the meantime, additional production plants are being constructed to keep up with the high demand and current shortage.

What would human civilization look like without metal? The discovery and understanding of different metals and alloys have shaped the way humans lived, fought, and made progress. From the early years of the bronze age to the more recent uses of stainless steel, few things have had as much influence on the world as metal. 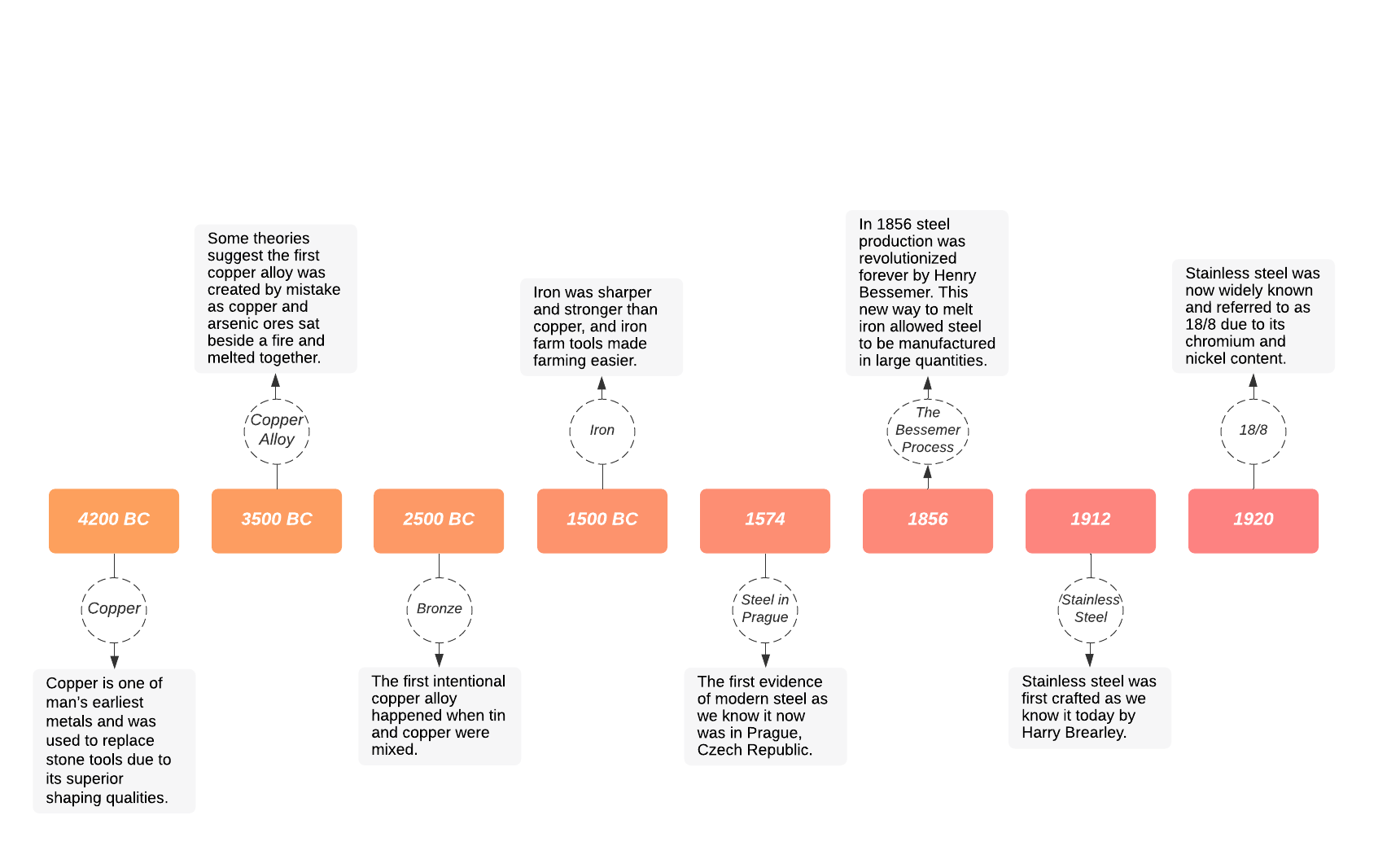 Copper is one of man’s earliest metals and was used to replace stone tools due to its supeior shaping qualities. Though copper’s exact origin is uncertain, archaeologists generally credit early Mesopotamians as the first to fully harness copper’s abilities. However, it is believed that this copper was mostly used for decorative purposes, since its relatively soft composition made it less than ideal for most tools.

The next step of progress was bronze, a copper alloy. An alloy is a metal that combines two or more metals or elements to create a new material.

Some theories suggest the first copper alloy was created by mistake somewhere around 3500 BC, as copper and arsenic ores sat beside a fire and melted together. Whether or not that is entirely true, the first intentional copper alloy happened later (2500 BC) when tin and copper were mixed, thus introducing bronze to the world. Bronze was stronger and superior to pure copper. This early combination would not be the last alloy to change the world.

Iron was used for tools and weapons, and was superior to its predecessor, bronze. While bronze had required both copper and tin resources, iron was a single material that could be smelted at high heats. The abundance of iron made it extremely accessible, and those able to craft it immediately implemented it into all facets of life. Iron was sharper and stronger than copper, and iron farm tools made farming easier and tough ground more workable. Iron’s discovery also put weapons, such as swords and spears, into the hands of many for the first time, permanently changing the course of the world.

Steel is an iron alloy formed with a low amount of added carbon, which gives it additional strength. Though steel has been present within civilization for thousands of years, it was often difficult to work with and overall scarce. The first evidence of modern steel as we know it now was in Prague, Czech Republic in 1574, then in England by 1614. As the 17th century continued and the prevalence of steel rose, it became known that the best steel of the time was in Stockholm, Sweden.

In 1856 steel production was revolutionized forever by Henry Bessemer. The Bessemer process was a new way to melt iron. It used molten pig iron and airflow to melt and purify the steel. This process allowed steel to be manufactured in large quantities and for a relatively low price.

The new accessibility of steel, thanks to the Bessemer process, changed the way the world travelled and planned. Steel rails were considerably stronger and held up ten times longer than iron rails. Steel trains could withstand heavier loads, making railroad transportation more efficient. Additionally, steel’s strength made skyscrapers a possibility for the first time, permanently changing the way cities grew and operated.

Stainless steel was first crafted as we know it today in 1912 by Harry Brearley. Brearley sought to form a corrosion resistant alloy for use in gun barrels. Amidst the process, one material remained rust free in the scrap heap. This martensitic stainless steel would later be known as the 420 grade.

By 1920 stainless steel was widely known and referred to as 18/8 due to its chromium and nickel content. With stainless steel’s growing popularity, its hygienic qualities were revealed. Stainless steel was corrosion resistant and safely used in 1928 to brew and hold beer, making it a prime material in the medical field and in food storage.

In 1931 stainless steel was used for aircraft for the first time. Though lighter materials such as aluminum and titanium are now preferred by the aerospace industry, stainless steel is still utilized for smaller pieces and parts. A few commonly used stainless steel grades in airplane parts are 13-8 MO, 15-5 PH, and 17-4 PH.

Stainless steel is now sorted into four general types with over 150 grades, and is used in millions of parts, machines, and other daily use items.

Well known for its versatility and sustainability, stainless steel is a commonly used material, easily recognized and present in many homes and industries. The name “stainless steel” is a broad term, applying to any metal with a minimum of 10.5% chromium content. There are many types of stainless steel, each given a numerical grade and organized under one of four general groups. These grades are based on the steel’s composition, properties, and uses. Familiarity with grade numbers and groups give quick insight into the steel’s makeup and applications.

The four general groups of stainless steel are austenitic, ferritic, duplex, and martensitic.

An often magnetic, low nickel material with good corrosion resistance, ferritic stainless steels are a popular material for indoor applications. They are commonly chosen for their resistance to stress corrosion and cracking, particularly in situations that require contact with other corrosive materials. These uses include cookware and car components. Ferritic stainless steel’s cost effectiveness and decreased malleability differentiate them from austenitic types.

Named for its nearly 50/50 composition of austenitic and ferritic, this hybrid is stronger than either of its alloys of origin. This strength gives duplex stainless steels improved corrosion and cracking resistance. Additionally, due to its high ferritic content, it is magnetic. Duplex stainless steels are relatively weldable and well suited for saltwater corrosive conditions, making them useful for the underwater oil industry.

Stainless steel is well known and frequently used due to its strength, versatility, and recyclability. The four general categories assist in beginning to outline the many compositions and uses for the material.

(a) Definition. Qualifying country, as used in this clause, means a country with a reciprocal defense procurement memorandum of understanding or international agreement with the United States in which both countries agree to remove barriers to purchases of supplies produced in the other country or services performed by sources of the other country, and the memorandum or agreement complies, where applicable, with the requirements of section 36 of the Arms Export Control Act (22 U.S.C. 2776) and with 10 U.S.C. 2457. Accordingly, the following are qualifying countries:Show citation box

(b) Individual acquisitions of qualifying country end products from the following qualifying country may, on a purchase-by-purchase basis (see 225.872-4), be exempted from application of the Buy American statute and the Balance of Payments Program as inconsistent with the public interest:

(c) The determination in paragraph (a) of this subsection does not limit the authority of the Secretary concerned to restrict acquisitions to domestic sources or reject an otherwise acceptable offer from a qualifying country source when considered necessary for national defense reasons.

The Value of Implant Grade Alloys

More body jewelers have seen the value of using implant grade metals, like ASTM F138 316 L VM Stainless Steel, for products that will be worn in or on the body. These alloys are certified to an ASTM "F" specification, which when applied to metals, signifies that the quality of the alloy is acceptable to be used in a medical application. Some of these "F specs" indicate implant grade, while others indicate surgical instrumentation grade. It is important to make sure that the material used is to the implant grade. These grades go through an additional process called "vacuum melting" (the "VM" in 316L-VM) which not only removes impurities, but in the case of stainless steel, allows for a better surface layer on the material. This layer prevents the leeching of elements, like nickel, into the body. Very important for people with nickel allergies.

The answer, not surprisingly, is yes and no. The chemistry, mechanical properties, and range of uses are within the same standards of quality, but Inconel® is a trademark that can only be used by one mill-Special Metals Corporation.

There's still some confusion among buyers, engineers, and machinists when it comes to superalloy grades. Why does the print say Inconel® 600 and the mill test reports refer to it as Nickel 600 or "ATI"® 600? Can one be substituted for the other? The answer to this is a definite yes. ASTM and AMS specifications guide the manufacturing of these high performance alloys. Reputable mills make absolute sure that the material they produce meets these strict standards. What's important in the name is not what comes before the alloy number, but the alloy number itself.